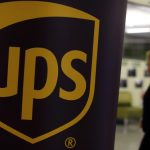 FILE PHOTO: A woman walks past a sign bearing the logo of United Parcel Service (UPS) at a job fair in Chicago, Illinois, October 18, 2014. REUTERS/Jim Young

SEATTLE (Reuters) – United Parcel Service Inc is on track to return a record number of packages this holiday shipping season, a sign that e-commerce purchases surged to new heights over the past month.

Both have benefited from booming delivery volumes over the past few years, but also have had to invest billions of dollars to upgrade and expand their networks to cope.

UPS said on Wednesday it handled more than 1 million returns to retailers daily in December, a pace expected to last into early January. It said returns would likely peak at 1.4 million on Jan. 3, which would be a fifth consecutive annual record, up 8 percent from this year.

The returns follow what could be the strongest holiday shopping season on record for both brick-and-mortar and online retailers, once stores publish sales data. Mastercard Inc said on Tuesday U.S. shoppers spent over $800 billion during the season, more than ever before.

FedEx said on Wednesday it experienced another record-breaking peak shipping season, but declined to provide specifics. The company’s Chief Marketing Officer Rajesh Subramaniam told analysts last week about 15 percent of all goods purchased online are returned, with apparel running at about 30 percent.

UPS said record-breaking e-commerce sales during Black Friday and Cyber Monday in late November jolted the returns season, with a larger flood of packages going back to retailers even as many gifts sat under Christmas trees.

UPS has worked for years to increase its ability to forecast customer shipping demands to handle major package volume spikes ahead of the holidays. It has also raised shipping rates and added 2018 peak-season surcharges.

The returns delivered in 2017 are part of the 750 million packages UPS said it expects to deliver globally during the peak shipping season from the U.S. Thanksgiving holiday through New Year’s Eve. That is an increase of nearly 40 million over the previous year.

UPS and FedEx shares were both up slightly on Wednesday.