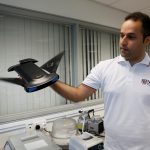 SINGAPORE (Reuters) – Researchers in Singapore have built an underwater robot that looks and swims like a manta ray, using only single motors and flexible fins to propel it through water in a manner uncannily like its biological cousin.

It’s not the first of its kind – academics have spent years trying to mimic the wing-like movements of rays’ pectoral fins – but Chew Chee Meng of the National University of Singapore says it’s the first to use single motors for each fin and rely on the interplay of fluid and fin.

One of nature’s most efficient and graceful swimmers, manta rays have long fascinated scientists with a unique propulsion method to cruise through even turbulent seas, flapping their pectoral fins effortlessly to drive water backwards.

So-called bio-locomotion, says Keith Moored, an assistant professor of mechanical engineering and mechanics at Lehigh University in Pennsylvania, has been studied for about 30 years.

But there is still a lot of work to be done on understanding the fluid flow around bio-robotic fins and the interaction between fluid and structure in flexible fins such as Chew’s manta ray robot, he said.

Chew’s MantaDroid is a flat black PVC body with ray-like fins and two rear rudders, which moves through water like its natural counterpart.

Chew said the fin’s passive flexibility allows it to interact naturally with the water, propelling it at a speed of seven-tenths of a meter (yard) every second, to cover about twice its body length.

By creating a passive fin from a single PVC sheet, rather than trying to mimic its movements with a series of motors and joints, Chew’s team found the robot interacted more naturally and efficiently with its environment.

“You’re not fighting against the hydrodynamics of the system,” said Chew, an associate professor at NUS.

The MantaDroid can swim for up to 10 hours. Chew and his team from the university’s engineering faculty plan to test the robot in sea waters and incorporate more modes of movement into its fin mechanism.

He said the team is also working on a ray twice the size of the 35-cm (14-inch) original, and believes such robots would be useful for studying marine biodiversity, gathering hydrographic data and underwater search efforts.

The MantaDroid is part of a growing field of biomimetics, which applies learning about natural systems and robotics to the design of new vehicles, said Thomas Atwood, executive director of the U.S. National Robotics Education Foundation.

Robots such as the ray, he said, could help carry out underwater mapping and ocean bed surveys, besides military reconnaissance.