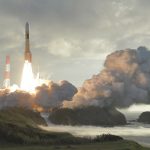 Image: An H-2A rocket carrying Japan’s fourth and final quasi-zenith satellite, the Michibiki No. 4, lifts off from the Tanegashima Space Center in Kagoshima Prefecture, southwestern Japan in this photo taken by Kyodo on October 10, 2017. Mandatory credit Kyodo/via REUTERS

Having four satellites that loop over Japan and Australia in a figure of eight orbit will allow for uninterrupted coverage and puts engineers on course to switch the system on in April.

Japanese GPS can locate devices to within several centimeters compared with the commonly-used U.S. system, which has an accuracy of about 10 meters.

Japan plans to have seven of the geo-positioning satellites in orbit by 2023.